These words radiated within the heart and mind of Rev. Lawrence Peter Gaines. He knew that God was leading and guiding him in a direction of establishing a new Christ-centered church. Here, the uncompromised gospel of the Kingdom would be taught and preached. This church would be created with the purpose of leading individuals to Christ while also nurturing and further developing the spiritual growth of the membership.

The first worship service for Greater Grace Fellowship was held on June 3, 2013, under the pastoral leadership of Reverend 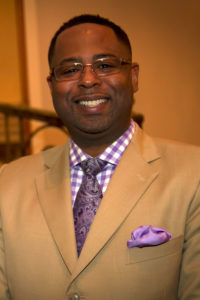 Gaines, at 6940 Martin Drive, New Orleans, LA. On that Sunday, over 100 dedicated Christians of diverse faiths and denominations boldly stood together and affirmed their membership to the newly formed Greater Grace Fellowship congregation. Since that day, the congregation has experienced the move of God’s hand and his amazing grace. The church developed various ministries to serve not only the needs of her congregants but also the needs of communities and persons near and far. During this time, it became evident that the fellowship needed a place of its own; thus the New Day Capital Campaign was officially launched in November 2015.

On March 24, 2016, Rev. Lawrence P. Gaines was called home and joined the Church Eternal. Standing on God’s promises, the fellowship continued to move forward with the founding pastor’s vision of up building God’s kingdom.

Associate Pastor, Perrin Abraham Gaines, was presented to the

congregation as the newly appointed Senior Pastor on Tuesday, May 3, 2016.

Under the leadership of Rev. Perrin Gaines, the congregation has purchased 3 acres of land along with a building at 5481 Crowder Boulevard in New Orleans East to be the new home of Greater Grace Fellowship.

Today and for years to come, Greater Grace Fellowship remains committed to presenting the Word of God passionately, loving people unconditionally and equipping disciples to transform the world for Jesus Christ.